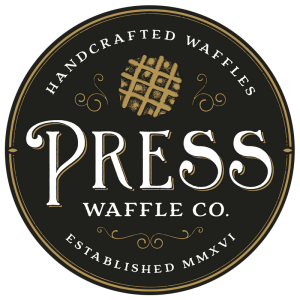 Crankin’ out the best waffles you’ve ever had!
Fully customizable authentic Belgian waffles made to order right in front of your eyes

Press Waffle Co. was born out of pure passion for the product. When Founder & President Bryan Lewis was traveling across Europe with his fiancé in the summer of 2013, they encountered the Liége waffle for the first time. Upon returning to Dallas, they could not find them anywhere, nor could their caterer re-create the magic they had experienced abroad.

When Bryan’s brother, Caleb, moved home from college, they began dreaming and planning their business and founded Press Waffle Co. as a food truck in 2016.

Press Waffle Co. opened its first permanent storefront in late 2017. After an exciting and successful appearance on ABC’s hit show Shark Tank, the brothers have set their sites on expanding their concept across the country. Press Waffle Co. is on a mission to teach America “A New Way To Waffle!”®